#1
I had an issue with one of my filters and shortly after that my red aro got a bit of gill curl on the bottom of one side. Top 3/4's is totally fine as is the other side but anyone cut the gill off a large aro? I would like to cut it off (just the affected part) and any tips or help doing it would be great lol. Have never used any products to calm an aro down in order to do it and know he's not gonna sit still and let me do it lol. I've had lots of aro's but never had any issues with gill curl before or much else being as hardy as they are

#2
I've done 4 or 5 gill cuts, two were "good" as in a near total success; the others were less "good". The reason some of the operations did not work out is that the gill curl had either already gone into the gill plate, making the curl permanent, or else I was too conservative in what I cut and did not take off enough of the gill membrane.

I may have a small bottle of Transmore kicking around somewhere if you want help with the operation. 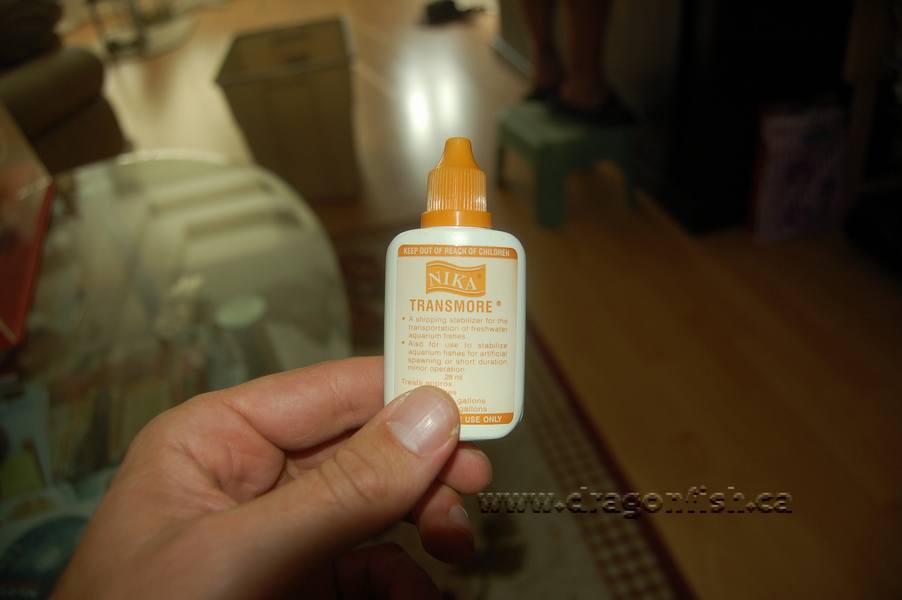 Below are a few photos I dug up of past operations I did.

Depending on the type of gill curl your fish has, you may decide to cut vertically or horizontally:

A horizontal series of cuts will look like this: 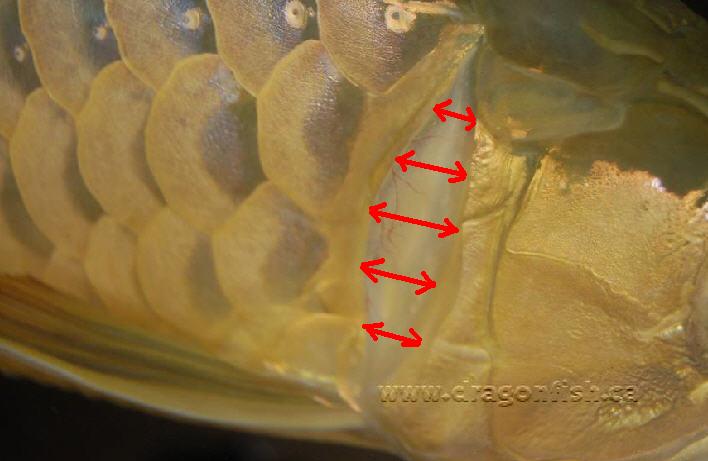 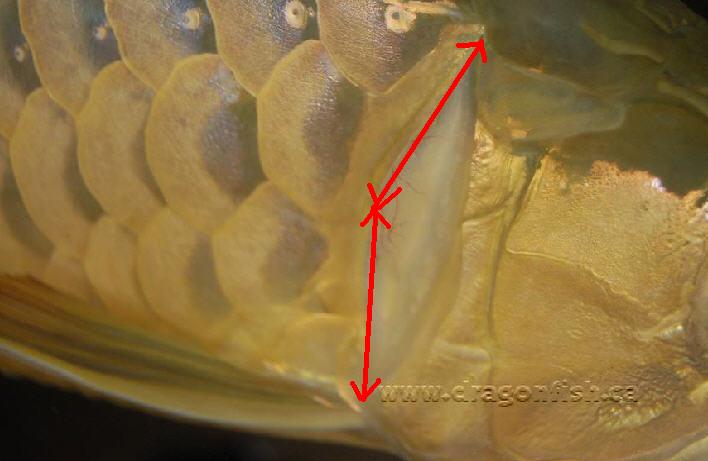 The fish in the above photo looked like this when seen whole: 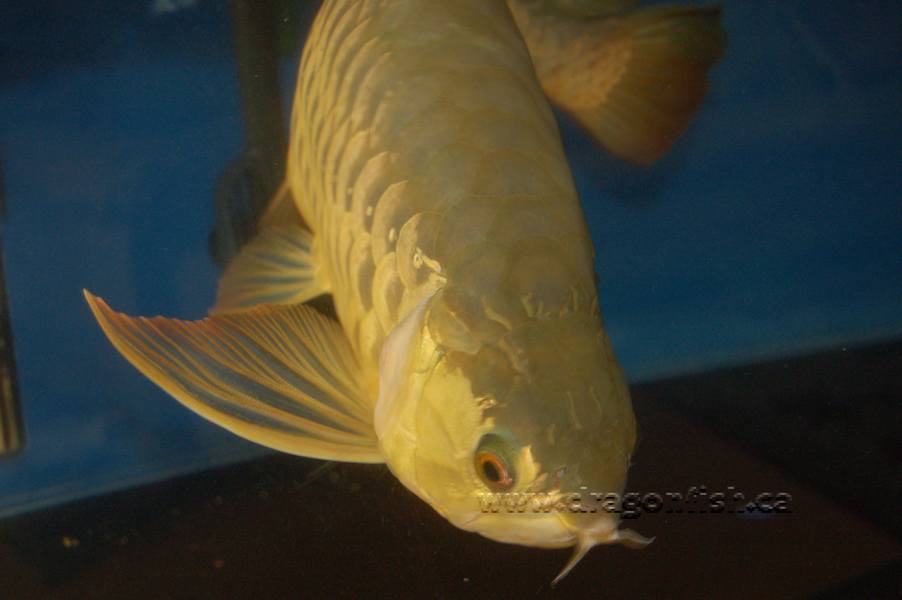 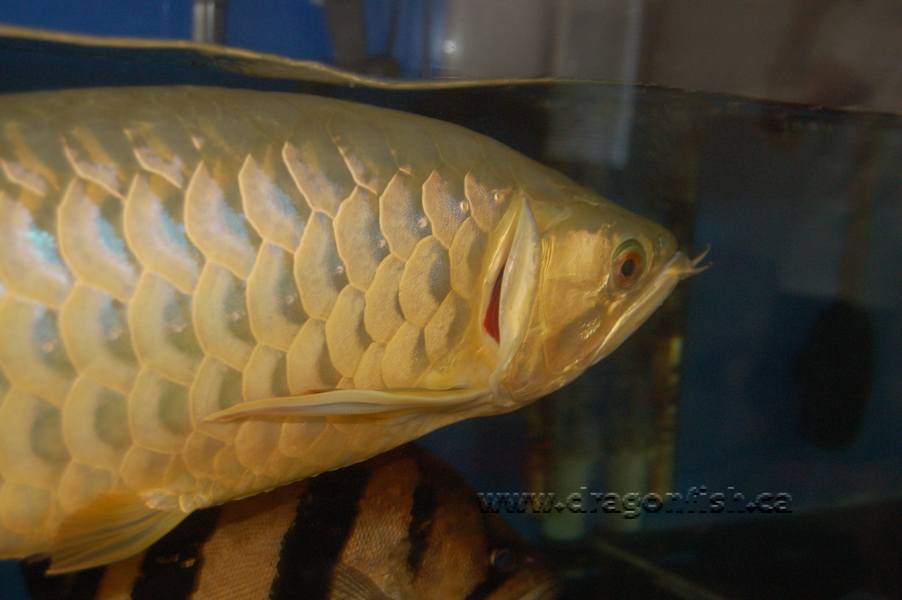 If the fish looks somewhat familiar to users of this forum, that is because it belongs to Mike aka Exoticaquaria, a sponsor of this forum!

Mike caught the fish and used a bag and large container to hold it: 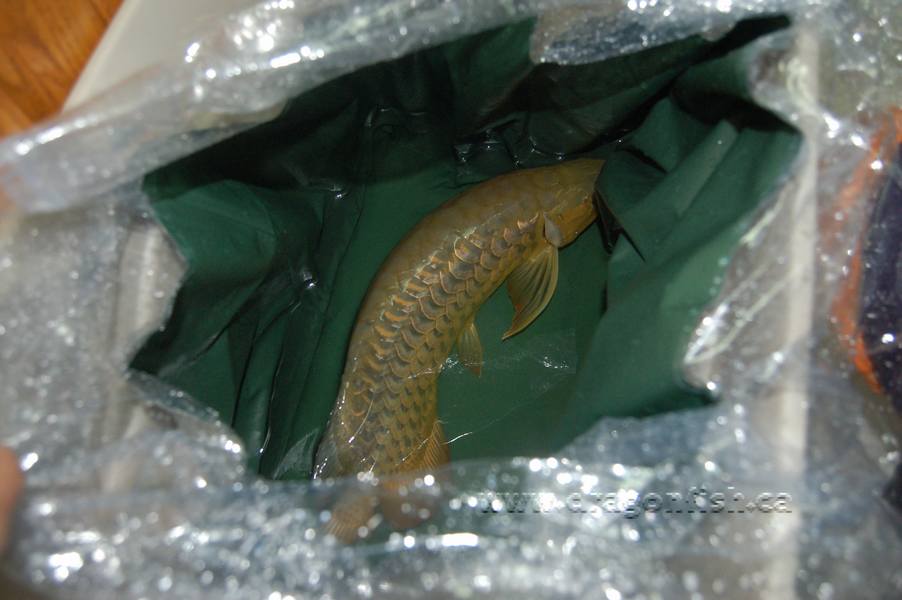 Then it was onto the operating table:

After the operation, which took about 15-20 seconds, it was back into the tank with the fish; note how the fish' head was positioned by outflow of filter to force oxygenated water into its mouth and through its gills: 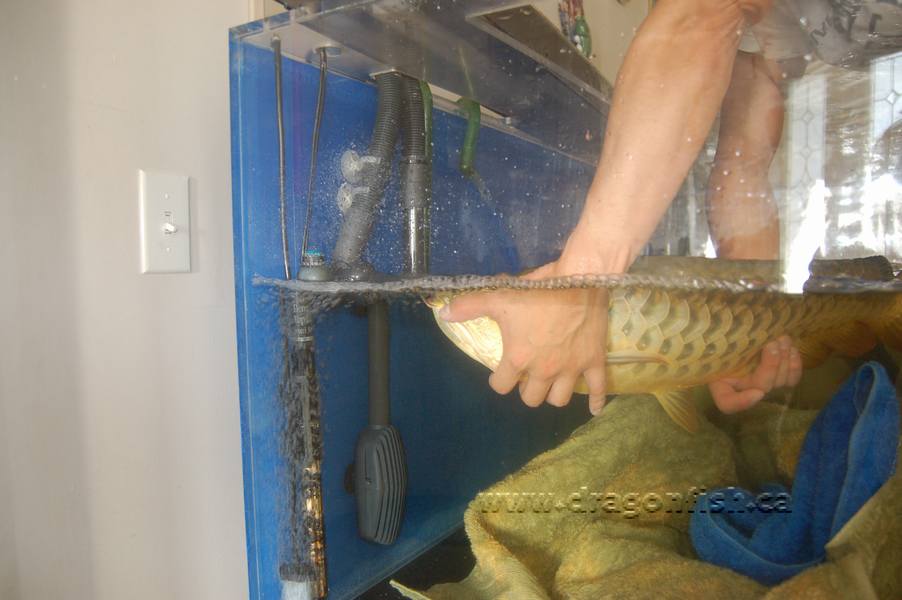 As you can see in this photo, Mike and I decided to go with the horizontal series of cuts: 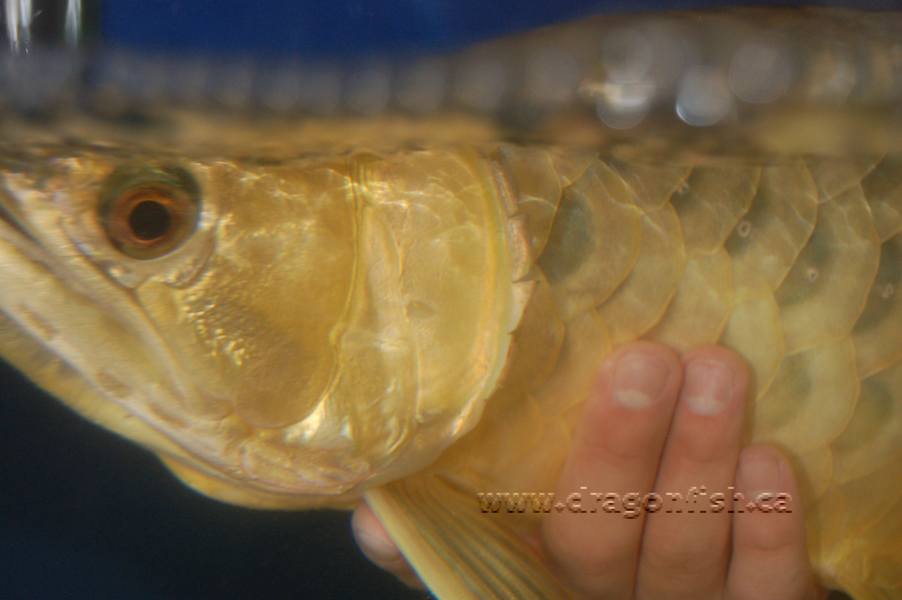 As you can also see, the gill plate itself was pretty severely bent: 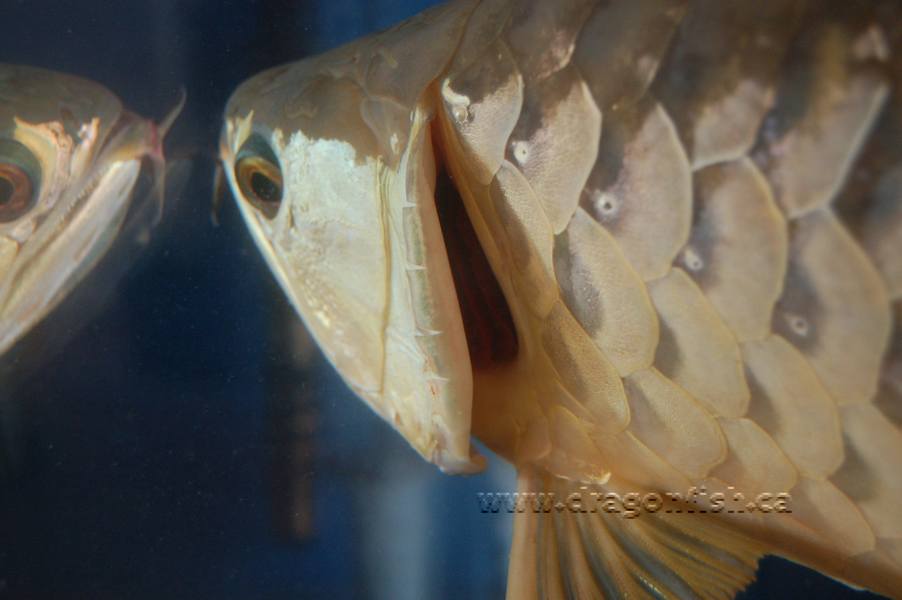 Looking back on this operation, I think we should have cut off the whole gill mebrane with a vertical cut, but even then, due to the severe bending of the gill plate itself, the "look" of the fish would still probably not have been improved that much. I am sure Mike can post some up to date photos of this fish.

#3
Next up, some photos of a more succesful operation.

This fish was one of the Panda Reds that came into Canada as part of this shipment here:


Unfortunately, the two reds ended up being a bit smaller than all the cross backs which led to one having its head bit off while the other was then separtated into a holding tank; it ended up being in that holding tank for several months; due to the tank being too small and water quality issues, it developed gill curl. I then picked the fish up, took it home, did the gill cut, and returned the fish. This was a very succesful operation. 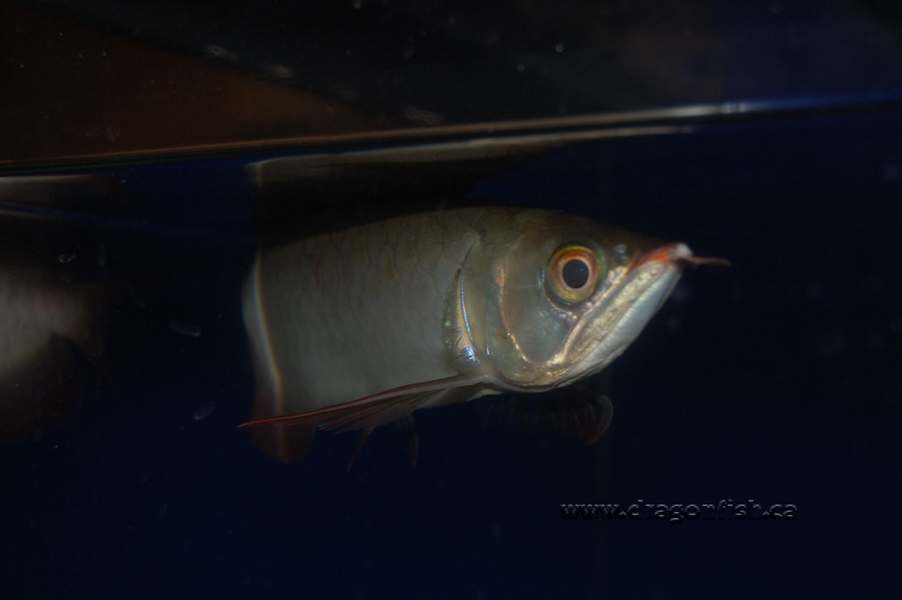 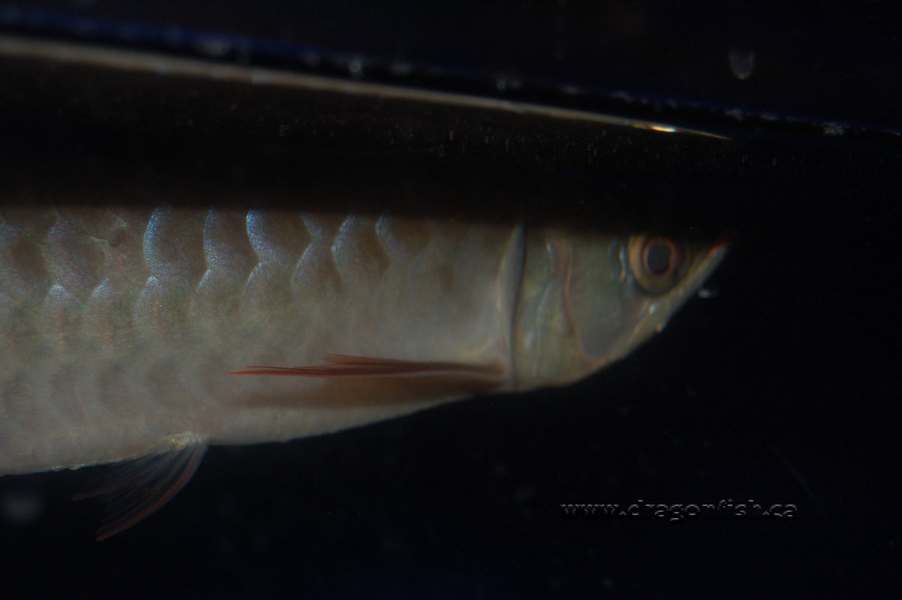 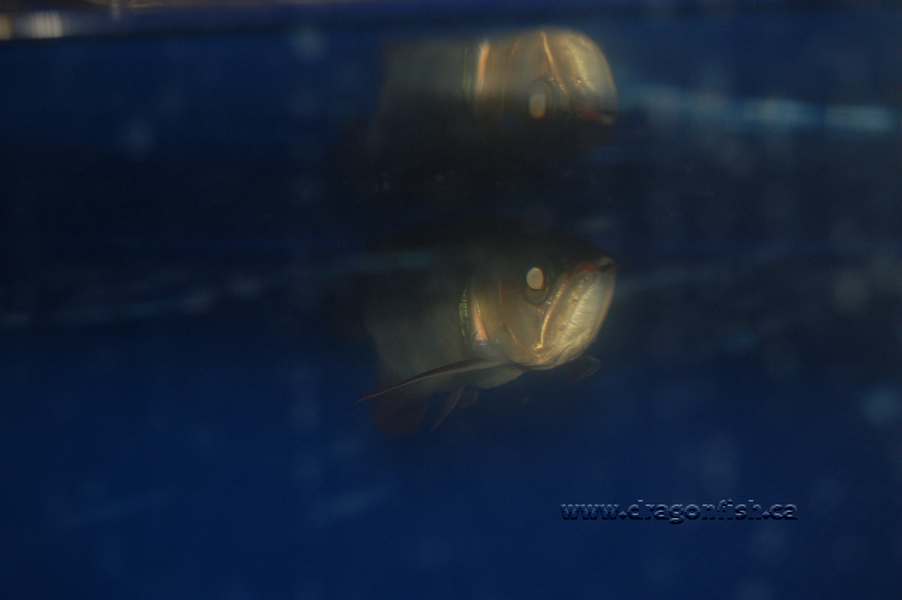 The fish was caught, dosed with Transmore and operated on, using a vertical cut this time: 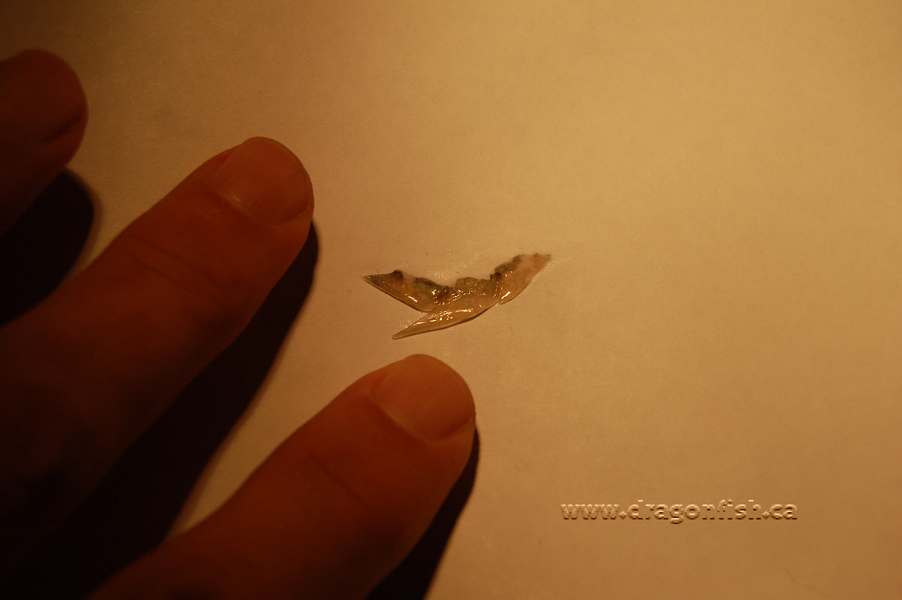 When the operation was done the fish looked like this: 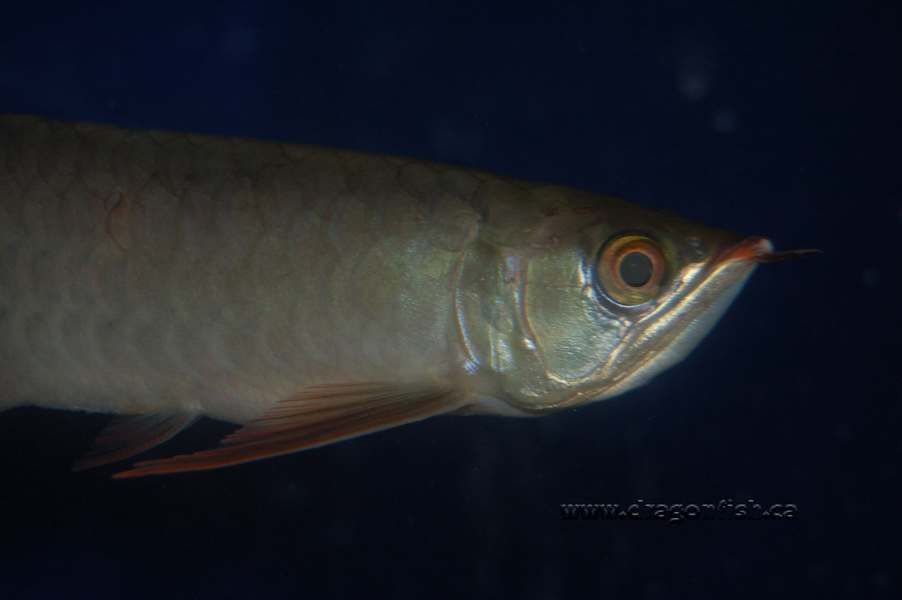 As far as I know that fish then went on to live a happy life (would be about 3-4 years old now) and the gill curl never came back as the gill membrane grew out.

I have some other photos of a planned operation for one of Bret's fish that came into Vancouver and required surgery. I was very nervous to operate on this fish as it sold for a lot and was not sold by me. In the end another forum member did the operation, with mixed lasting results. If Bret and the other forum member give me permission to share more about that fish and its operation I will do so. Furthermore, I would guess that Bret could add a lot to this thread with photos and information relating to past surgeries that he has done.

Finally, I know forum member King-El knows a lot about doing fish operations too, so maybe he can add to this thread. This thread could become a long overdue sticky.
Last edited: Apr 16, 2012

#4
wow how long ago was that now? lol. i think 4-5 years ago? bring back old memories. sad to say the left side curled back the same way a few weeks after the operation. guess it was too late to do the op since the curl wasn't just the membrane but the hard gill cover as well. right side was only the membrane and everything is fine now.
R

#5
Theo for sure any help would be greatly appreciated . Want to cut it out while it hasn't gotten too bad yet. Also be great to do it so if I was to ever have this issue pop up again (plan to have many more aro's in my lifetime lol) I can address it or help someone else down the road.

#6
Looks like Theo has already provided some very useful information.

I downloaded some information myself a while back from Arofanatics that I'm attaching here in case it's helpful.

#7
That chart sure makes it look simple enough to do thanks for that. Any recommendations on the best anti infection meds to use? I'm a saltwater guy and never had to use any meds on my aro's or freshwater fish before.

#8
Please let us know how the operation goes Reptileguy.
R

#9
Theo all went really well. Was very easy to do and no issues whatsoever so was a big relief. Now to see how the Arowana heals though am fairly optimistic. It was a small section and only a small amount of gill curl which wasn't seeming to get any worse so let's see lol. Can't thank you enough for lending me the bottle of Transmore it sure works great. I didn't have a bag big enough so used a small cooler but took very little product and will get the rest back to you soon as I get the chance.

#10
Congratulations, you are now an "aro doc"

I can't remember if I mentioned this, but you should add a heaping tablespoon of aquarium salt per 10 gallons to help ensure against infection post op.
R

#12
wow congrats. Did some surgery in the past too but i got other methods. Usually for those that curled up to the gill plate.
R

#13
Thanks and love to hear your methods. Always great to learn new ways to do things. Also in case for some reason the Aro doesn't heal properly. So far he looks great but you never know lol

#14
Nice work everyone. Glad the surgery went well. Btw where do u purchase Nika Transmore? I googled it and tried to find it online in Canada. I couldn't find it. I would like to get a bottle and do some tail surgery on my Aro.

#15
Crazyfish88 said:
Nice work everyone. Glad the surgery went well. Btw where do u purchase Nika Transmore? I googled it and tried to find it online in Canada. I couldn't find it. I would like to get a bottle and do some tail surgery on my Aro.
Click to expand...
You will have to go to Singapore to get any Transmore. Next best shot would be to contact a local veterinarian; I have the chemical formula for Transmore written down somewhere, will see if I can dig it up. I think Earl has also had success using clove oil?

#16
Cirrus said:
You will have to go to Singapore to get any Transmore. Next best shot would be to contact a local veterinarian; I have the chemical formula for Transmore written down somewhere, will see if I can dig it up. I think Earl has also had success using clove oil?
Click to expand...
Can it be shipped or is it a hassle through customs?
R

#17
Theo one of our customers is a veterinarian and have gotten meds for the shop a couple times off her so if you know what's in it she maybe able to get it. I've heard for clove oil you mix roughly one part clove oil to 9 parts ethanol. It was from a mosterfishkeeper thread.


Cirrus said:
You will have to go to Singapore to get any Transmore. Next best shot would be to contact a local veterinarian; I have the chemical formula for Transmore written down somewhere, will see if I can dig it up. I think Earl has also had success using clove oil?
Click to expand...

Ya I seen it. I scared to screw up using clover oil. My aro is 8 yrs old. Worried it won't wake up. Rather use something like transmore that's already in a bottle and easy to use.